Police: Lady crushed on MBTA bus after telling assailant she was speaking too loud and to ‘shut up’ 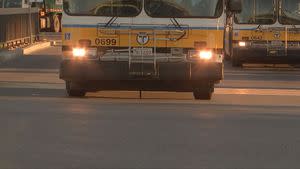 What began as a dialog on a cellular phone Tuesday afternoon ended with an assault and an arrest.

Transit Police say they responded to the world of Massachusetts Avenue and Boylston Avenue round 4:30 p.m. for a report of a battle on an MBTA bus. Responding officers had been approached by a sufferer who claimed she had been attacked by a girl, later recognized as 37-year-old Shauntay Simmons of Boston, in keeping with police.

The sufferer says she was having a dialog on her cellular phone whereas Simmons was consuming alcohol and being very loud, in keeping with authorities. Transit officers say the assailant was being so loud that the sufferer was unable to proceed her telephone dialog. It was at that time the sufferer advised Simmons to “shut up,” in keeping with police.

Simmons took exception to the remark and commenced slamming the sufferer’s head into the bus window and repeatedly punching her within the face.

Police say Simmons fled the bus after it pulled over, leaving the sufferer with abrasions and swelling about her face.

Officers obtained an in depth description of Simmons and tracked her down on Massachusetts Avenue. She was taken into custody by Transit Police.